From farming to moonwalking 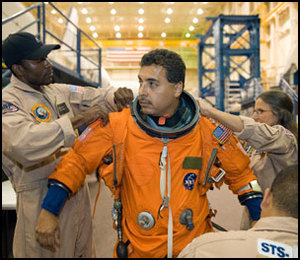 Jose Hernandez and his brothers were sitting in the back seat of the car and their bodies and clothes were soiled with dirt and drenched in sweat. His father Salvador Hernandez sat alongside his wife Julia in the front seat and, like their children, they exuded the smell of their efforts as farm workers.
It was the end of the day and in silence they bore the heaviness and pain of manual labor from their head to their feet. At that moment Salvador turned around to stare at his four children for about a minute until he told them to look at their hands.
Everyone including Jose obeyed their father and saw the dirt and scratches caused by harvesting crops with their bare hands.
“If you don’t want to live like this for the rest of your days, stay in school to get a better life, you hear me?” Salvador warned them in a solemn tone.
That was more than 30 years ago in one of the trips the Hernandez family made from Michoacan, Mexico to the U.S. to make a living, but today Jose is one of the first Hispanics to travel much farther, into outer space.
With the 40th Anniversary of the moon landing this month and little progress in space exploration since, Hernandez, a current resident in the Clear Lake area, is scheduled to take a trip literally out of this world in August to continue contributing in that mankind effort. 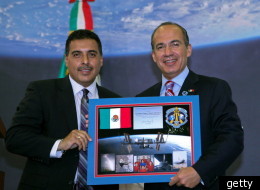 10, 9, 8...
Jose, an astronaut who works for NASA (Nacional Aeronautics Space Administration) since 2001, hopes to be the first Hispanic astronaut to walk on the moon despite relatively slow progress in space exploration.
“I didn’t learn to speak English until I was 12 years old because my parents only spoke Spanish,” said Jose, the youngest of four children.
Unlike his three siblings, Jose was born in California, but they all went through the same experience as young migrant workers and, apparently, they followed their father’s good advice.
All four of them pursued higher education, currently hold professional occupations and call the United States home.
His sister Leticia is an accountant, his brother Gilbert became a certified mechanic and Salvador, Jr. works as an engineer for the U.S. Department of Energy. His parents are retired now and live in Stockton, California. 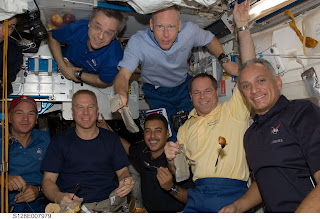 ...7, 6, 5...
Life for Jose and her siblings was a continuous challenge especially because they lacked the typical school schedule that most students have since his parents moved around a lot following crops through the country.
“We lived like nomads and I think we moved more than the children of military parents and they tend to move often due to service requirements,” said the 46-year-old astronaut.
The children changed schools districts constantly because Salvador was following the harvesting in the West Coast to pick tomatoes, grapes, strawberries, cucumbers and other crops.
During Christmas time they would come back to Mexico to rest briefly. Then, they would return to the states after the New Year’s break to begin their demanding task of studying and working tirelessly, even during summer break.
“That lasted until I was about 13 years old when a teacher talked to my dad to tell him that it wasn’t good for us to be jumping around from school to school for our academic and emotional stability,” remembered Jose. 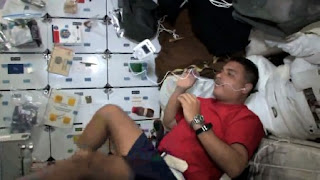 ...4, 3, 2...
From that moment on Salvador and Julia made the conscious decision to move to the U.S. permanently to give their children a more stable, sedentary life.
After graduating from high school in Stockton, Jose went to University of Pacific to study electronical engineering with a scholarship and furthered his field of study at the University of California in Santa Barbara where he got a master’s degree in computer engineering in 1986.
“Ever since I was a little kid, I had an inclination for the engineering subject, you know, studying ways to build things, but more than that, I’d always had a curiosity about the astronauts,” Jose said, who’s a husband and father of five children.
The following year, the young Latino worked for Lawrence Livermore National Laboratory of the U.S. Department of Energy (DOE) where he dedicated himself to learn about matters on nuclear technology.
Jose also joined the board of his alma mater in 2007 to increase the standard and quality of education of the University of the Pacific.
During his years of work in the DOE, Jose became an expert in other technologies like X-rays, ultra sound, computer tomography, MRI and other types of analysis related to medicine. Thanks to his training at the end of the 80s and the collaboration of a colleague, he developed a medical breakthrough with the mammography imaging system to detect breast cancer in the early 90s.
“What also inspired me to be an astronaut was when in 1981 NASA chose Frank Chang-Diaz, a Costa Rican, to be an astronaut,” recalled Jose, who decided to submit a job application with NASA in the late 90s. 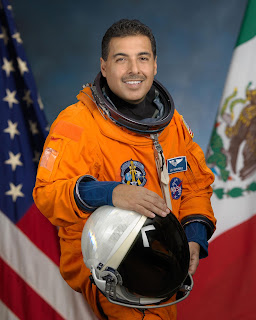 ...One and Liftoff!
While working for NASA, Jose worked on projects and tests with a variety of materials including space shuttle structuring, elements effects and toxic, environmental, inflammable reactions testing.
It wasn’t that easy to become an astronaut because chosen applicants pass through a rigorous process and Jose had to do it three times until he was accepted in May 2004.
Another goal he has mapped on his path besides wandering around Earth’s outer layers, is to be the first Hispanic to walk on the moon, an enviable prize for someone who used to pick fruits and vegetables in the fields as a child.
While training for his mission in late August, Jose has been at the Kennedy Space Center in Cape Canaveral, Florida handling last minute preparations including takeoff and landing of shuttles, but outside his work he’s just one more neighbor in the south Houston area near the Johnson Space Center.
Despite his stratospheric achievements, Jose remains very grounded and down to earth (so to speak) and it's something that can be appreciated while having a conversation with him, either in English or Spanish.
“Aside my work in NASA, my wife Adelita and I have a Mexican restaurant in the Clear lake area and you can come and eat any time,” added Jose in an open invitation to the Examiner.
It's not too shabby for someone who went from being just a migrant worker to becoming a space explorer.
*NASA was created in July, 1958 during President Dwight Eisenhower's administration and began operations on October 1st that same year.
Previously published in www.examiner.com in July, 2009.
Posted by Don Juan Corzo at 10:35 AM